What is Moral Leadership?

SCMLi defines Moral Leadership as the capacity to exert influence and effect change by leading self, then others towards specific goals, guided by universal moral principles.

As the growing number of moral and ethical incidents in business, political and even religious institutions demonstrate, individuals and organizations often appear to deviate from commonly held norms and principles, and they do so at increasing cost. Leadership shake-ups, regulatory measures and behavioral codes are routinely introduced to solve the problems. Meanwhile a realization is sinking in that revolving leadership will not transform unethical organizational cultures and individual behavior is seldom effectively impacted by regulation and codes.

Morality rather than rules are far better candidates for guiding behavior. An intrinsic stimulus, morality centers on personal character and conduct, where a good deal of ethical challenges tend to originate. Personal character is also an important element of leadership and group approval, forming the nexus between leadership, organizational culture and morality, the space SCMLi explores and navigates.

Each dimension in turn is associated with particular leadership skills and capabilities, eighteen in total. Leading self necessitates self-evaluation, reflection, initiative, perseverance, self-discipline, rectitude and systemic thinking. Leading others meanwhile requires empathy, encouragement and consultation, but also a focus on promoting unity and family responsibility. This last trait in particular does not appear often in other leadership constructs. The social dimension of Moral Leadership finally requires vision, the transformation of dominant relationships, justice, empowerment, service to institutions and finally historical perspective. This last dimension of Moral Leadership is key as it propels it beyond the generally limited interests of individual and organizations. 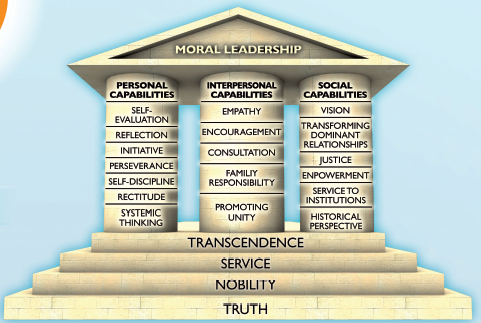 About the Sam Rima

Sam has dedicated the last 25 years to passionately promoting the need for both moral leadership and spiritual capital. Believing the two are inextricably linked, Dr. Rima’s focus has been on assisting organizations to leverage both in an effort to foster individual, organizational and societal transformation.

Moral Intelligence is the cognitive capacity to distinguish right from wrong. It is a fundamental prerequisite before one can act on what one believes to be right. For being such an important skill, few people spend time cultivating it. How do professionals keep up with the complex moral issues arising in today’s diverse and fast-paced organizational environments? Are the basic lessons about right and wrong learned in the family sufficient? Does formal education do an adequate job? No matter where you feel you are in terms of your own Moral Intelligence, this foundational course will get you up to speed and provide you with essential tools to increase your Moral Intelligence. You will learn about your moral compass and become familiar with its five elemental skills that impact the personal and interpersonal levels of an organization.

This course is ideal for ideal for individuals at any organizational level, undergraduate and graduate students.

Moral Courage is the foundational character trait that supports a person doing the right thing despite the risk of adverse consequences. Moral Courage requires purposeful rather than impulsive action and is informed by one’s Moral Intelligence. This course focuses on building your character and provides you tools to get you confident and ready to act! You will learn how to apply your personal values, recognize the risks and endure the challenges that come by acting with Moral Courage.

This course is ideal for iindividuals at any organizational level, undergraduate and graduate students, particularly individuals faced with difficult choices.

A Moral Leader knows and understands the universal principles that must guide every thought, decision and action. Reflecting upon and courageously taking decisive action to create a work environment that embodies the essence of these principles must be a Moral Leader’s daily business. Seeing inherent talent and cultivating the latent potentialities in others is a priority of the Moral Leader. As individuals grow and develop, becoming their best selves, others around them are positively transformed and the organization becomes a direct beneficiary of this culture of learning and growth. Moral Leaders work to create a climate of trust and collaboration where creativity, innovation and unified action are the by-products.

This course is ideal for individuals who have or aspire a leadership position. It is also suitable for graduate students.

A moral dilemma is a situation which confronts individuals with a choice between different or conflicting moral principles. Today’s professional environment is fraught with moral dilemmas: shall we save the planet or save our jobs? Shall we do what is legal or what is right? Many leaders have lost their careers by badly handling moral dilemmas, while organizations’ reputations have been ravaged by all sorts of ethical scandals. Moral dilemmas occur on a personal level and on all organizational levels. Moral intelligence and moral courage boost a leaders’ ability to resolve moral dilemmas effectively. Leading an organization through a moral dilemma requires not only the insight to resolve the dilemma but also the communication and facilitation skills to get everyone aligned. This course is based in case studies to assist you to develop these important skills in a practical manner.

This course is ideal for individuals with decision making responsibility, undergraduate and graduate students

DARK SIDE OF LEADERSHIP

The Dark Side of Leadership is the combination of our inner urges, compulsions and dysfunctions, cloaked in an outer persona we present to the world. Our Dark Side can be a source of motivation for achievement, but if not progressively understood and processed, it can also be a source of friction and failure in our life and leadership. Carl Jung, referring to the dark side, said "The brighter the persona, the darker the shadow". Virtually all moral and ethical failures experienced by leaders can be attributed, at least in some way, to the dark side of their personality. Moreover, the dark side is also the root cause of much organizational chaos and cultural dysfunction. In this course, we use our proprietary assessment tool to help you identify the shape your unique dark side has taken, understand how it has developed over time, and the unique challenges it presents to your exercise of healthy moral leadership. This course will also help to raise your level of self-awareness and develop a proactive personal plan to mitigate the potentially destructive manifestation of your dark side.

Spiritual Intelligence is a form of intelligence (similar to IQ, Intelligence Quotient and EQ, Emotional Quotient) that defines and measures the spiritual dimensions of people and organizations. In this course you will become familiar with the underlying principles, character traits and skills associated with spiritual intelligence. Increasing your Spiritual Intelligence, awareness and capacity will help you acquire a more holistic view of reality, including your personal and organizational realities. Challenging and changing your worldview will unlock new character traits and personal skills which you may have had difficulties accessing previously. This course is intended to open your mind and soul to new possibilities, while equipping you with tools to take advantage of new opportunities.

This course is ideal for individuals at any organizational level, undergraduate and graduate students, particularly those exploring their own potential

This course is ideal for individuals at any organizational level, undergraduate and graduate students. It is also suitable for individual in decision making and leadership positions.